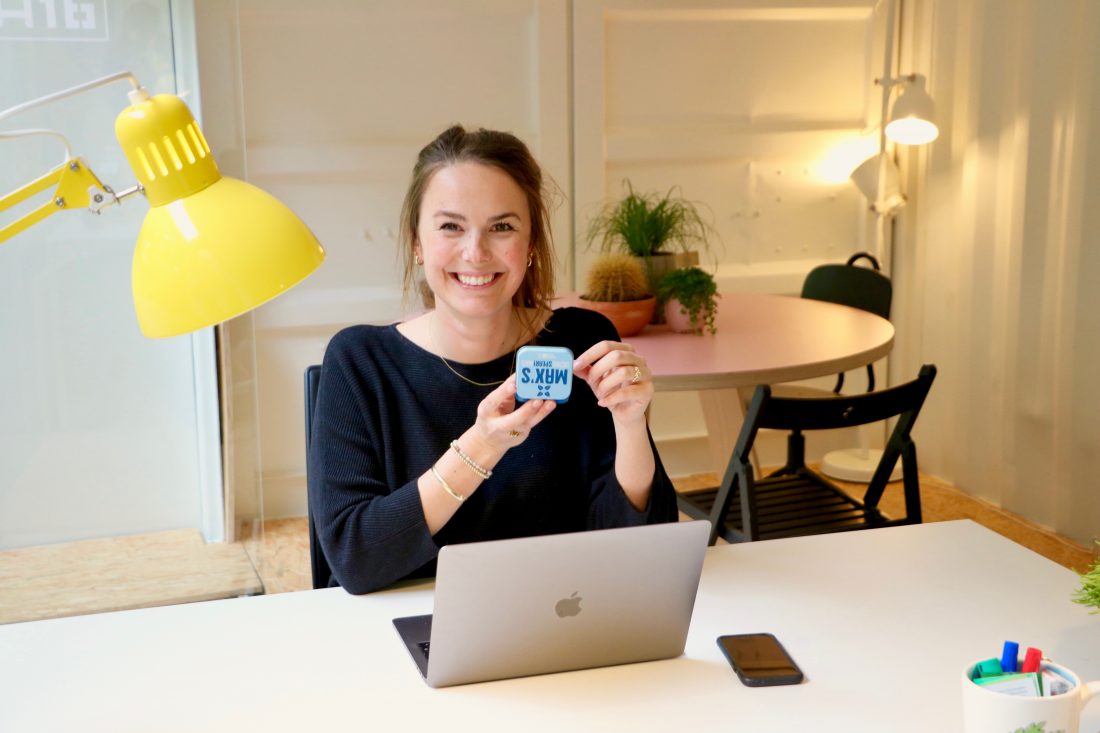 Max’s Mints startup of the week

Max’s Mints was the startup of the week and was previously interviewed by Sprout. Read the interview below!

Daughter Floor (31) and father Pieter van der Steen (63) make the peppermint market more sustainable. With the startup of the Week Max’s Mints, they already sold 150,000 organic mints worldwide. “The mint shelve has been the same for 20 years.”

What is Max’s Mints?

Max’s Mints is situated in Haarlem and is a brand of vegan, organic mints. The makers rid their production process of artificial pesticides, they don’t work with flavorings and gelatin, and have their mints packed in a social workshop in The Hague, where people with a distance to the labor market work. The mints are packed in tins because tins are easily recyclable. The startup currently delivers six different, sometimes very remarkable flavors; from coffee to ginger, and from menthol to lemon.

“We call it mints on a mission,” says co-founder Floor van der Steen. “We hope to make it easier for consumers to make more sustainable choices. Even if we are just talking about a peppermint, many small choices can make a big difference together. ” Sustainability is “the only way”, says Floor: “If we want to leave a liveable world behind for our children and grandchildren, we have to work on that right now.”

Who are behind it?

Van der Steen runs the company together with her father Pieter van der Steen. Pieter has a lot of experience in the confectionery industry. He was once a director at Sportlife and managed a stroopwafel company. Pieter also led the name change from the “S negerzoenen” to “zoenen” (popular dutch snack). He saw organic food as a growth market for some time, but in which product category could he best invest?

Daughter Floor had an idea about that. The self-proclaimed “sustainability champion” lived in Italy for some time and discovered the slow food movement there. Once back in the Netherlands, she started working as a buyer at the sustainable supermarket Marqt.

Father and daughter decided in 2016 to start a sustainable confectionery brand together. “We stood in front of the confectionery shelve and looked at how sustainable each product type is,” says Floor. “A lot has happened with chocolate and cookies, but the mint shelve is the same for 20 years.” For a year, the two worked on a sustainable mint brand, and in 2017 they launched Max’s Mints. The startup currently has four employees (2.5 FTEs), including the entrepreneurs.

Who is the target group?

Max’s Mints is located in the Marqt, the Ekoplaza, and many organic stores. So it’s no wonder that the family business focuses primarily on consumers who care a lot about sustainability. Right now, the mints end up mainly in the shopping baskets of consumers from 20 to 45 years old from Amsterdam and the cities around it.

Floor, however, wants to broaden this target group: “Mints are an impulse-driven product, so we focus very much on traveling people who go to the museum and the theater. Our brand must ultimately be at every location where you now see normal peppermint. ”

If you want to appeal to the widest possible audience, then you can use a price that is not too high for your product. The mints of Floor in the regular size cost on average around 2 euros and 50 cents per can, which she says is 15 percent more expensive than other non-sustainable brands. “But we are not a price fighter. I expect this price difference to be so small that people will still buy it. ”

How far is Max’s Mints?

Max’s Mints is currently on the shelves with six flavors of mints on the shelves. The startup offers the tins in two different sizes. Since 2017, the company has sold around 150,000 cans. Floor expects her company to sell 1 million cans on an annual basis in 5 years. Max’s Mints is also spreading its wings to other countries. The brand has also been available in stores in Spain, Luxembourg, Ukraine, and Poland since the beginning of this year. Since this month the mints are even sold in Dubai and South Korea.

What is the business model?

Max’s Mints sells its product to wholesalers, who resell the mints to customers. Among the customers are both supermarkets and caterers. For their internationalization, father and daughter Van der Steen work together with a distributor, who sells and resells the parties in one go. The first reports about consumer sales from abroad are “super positive” according to Floor, although it is still too early to say anything meaningful about foreign sales. Floor does not want to say what margin it uses for sales.

Until now, father and daughter Van der Steen financed the company entirely with their own money. How much, that remains a secret. Floor states that Max’s Mints is not looking acutely for an investor, but “maybe it will be interesting in the future”. She can’t yet say how much such an investment should be. “The investor should at least have expertise in the industry.” Max’s Mints is not yet profitable but is growing in terms of turnover. The turnover of the company last year was around 50,000 euros and for this year Floor expects to come to a ton.